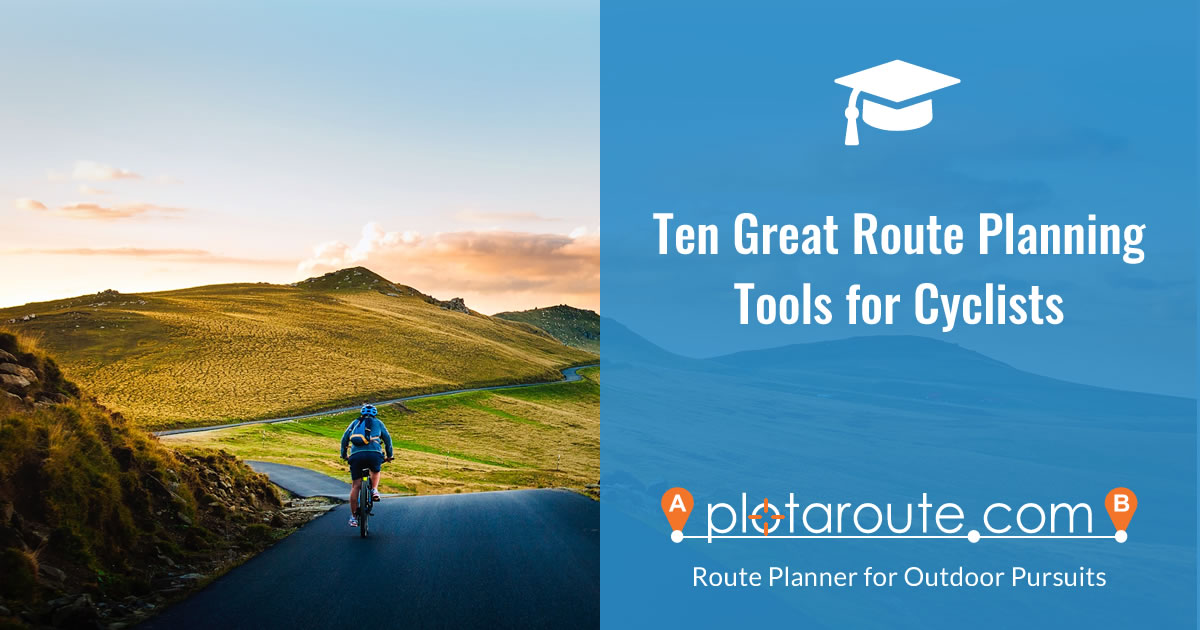 If you’re looking for an online route planner with great features for cyclists, plotaroute.com has lots to offer.  Check out these top ten tips before you plan your next ride.

Check out the video to see a demo of this feature in action: Demo of Street View Split Screen Route Planner.

Maps that highlight designated bike paths and cycle routes are perhaps one of the most useful aids for planning a bike ride. The OSM Cycle Map on plotaroute.com shows national, regional and local cycle networks, as well as dedicated cycle paths. Premium members of the site also have access to Google’s Bike Paths map layer, which shows known bike paths on Google maps in the route planner.

plotaroute.com has a very sophisticated Route Profile Tool that lets you examine the elevation profile of a route in depth.  You can zoom in to sections of the route, apply different levels of smoothing and get detailed stats, including the longest climb and the total ascent. The tool will also automatically the climb categories of any major climbs on the route. And you can add labels to the chart – useful if you want to share it and highlight certain points on the route. 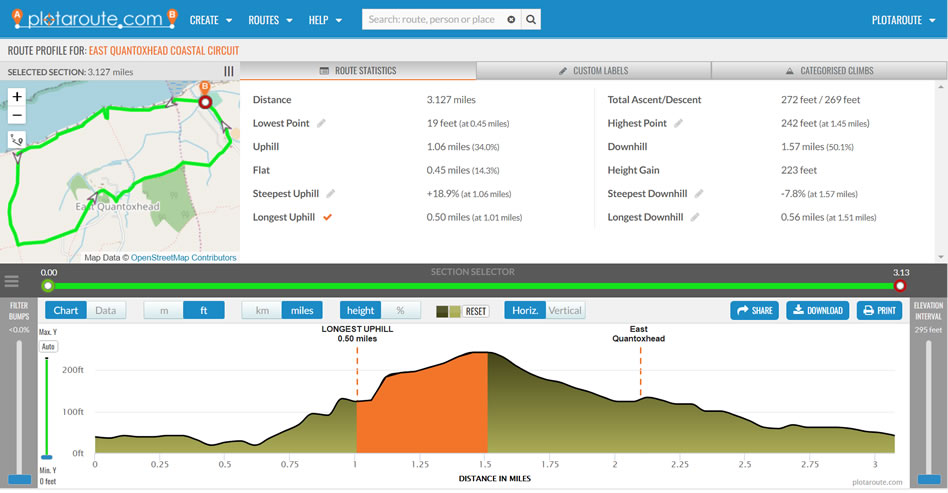 If you want to see where the hills are on the map, plotaroute.com route maps include a Hilliness option (under the Display menu), which highlights gradients in different colours; red sections are uphill, green are downhill. The darker the colour, the steeper the gradient and moving your mouse over the route will tell you how steep each section is. 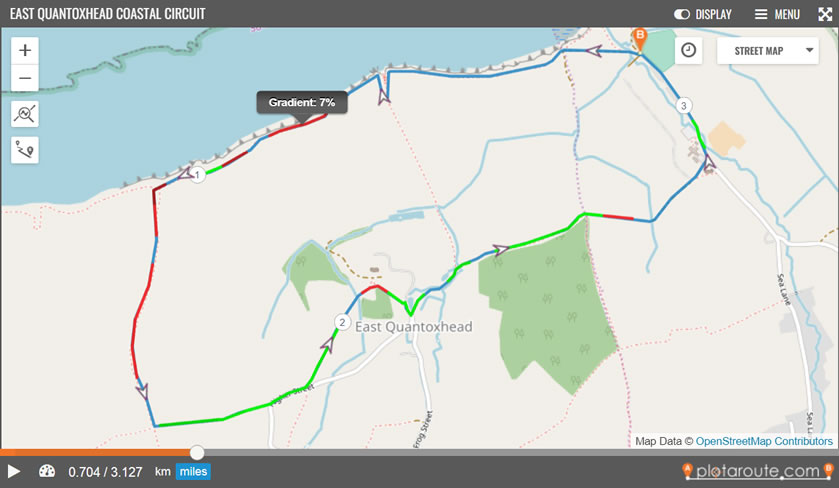 How annoying is it when your GPS tells you to turn right just as you’re whizzing past the junction?!  If you want a bit more notice of turns, the Turn Warnings feature is right up your street (forgive the pun!).  When you download a route from plotaroute.com for use with your GPS device, you can choose to add additional turn warnings a given distance before the turn itself.  You’ll get something like “300m: Turn right...” popping up before the turn itself, giving you plenty of time to manoeuvre.

As an alternative, if you want some warning but don't want a warning both beforehand and at the turn, the Shift Directions feature can be used to shift directions back by a set distance, so that you get the notification early. 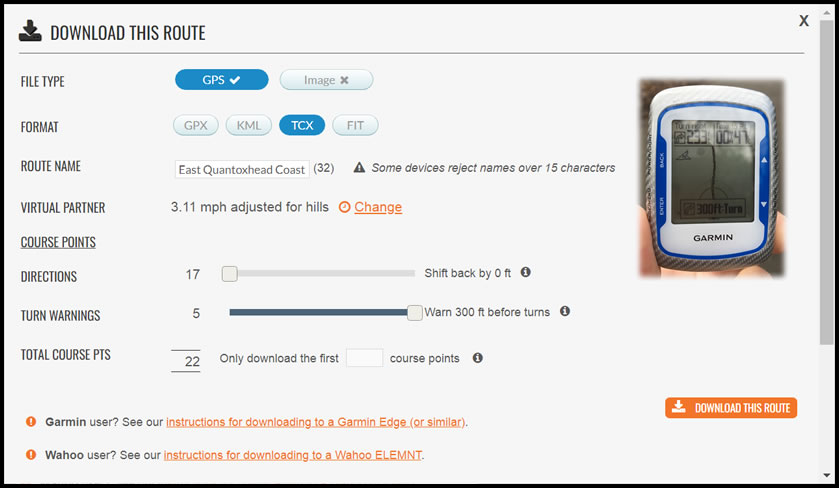 When you’re riding a new route, you don’t want to have to keep stopping to read lengthy directions or for directions to be truncated when displayed on your GPS because they’re too long. Fear not, shorthand directions are a breeze with the Abbreviated Route Directions feature on plotaroute.com. Simply set up the abbreviations you want to use (e.g. “NW on” instead of “Head northwest onto”) and next time you plot a route all your directions will be much shorter, making them easier to read and less likely to be cut short. 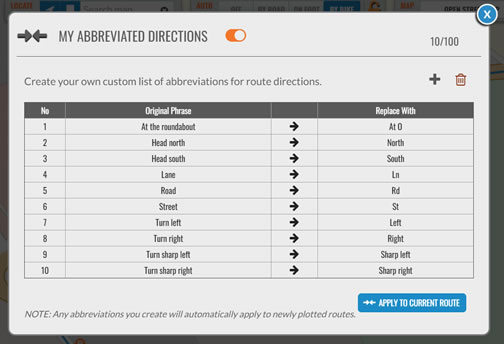 Sometimes you want to go out for a ride, perhaps stopping at a café or two on the way, but don’t have an exact route in mind.  A great way to experiment with options for new routes that pass through certain places is to use the Plot with Waypoints feature on plotaroute.com. Rather than plotting out a detailed route, you place a small number of waypoints on the map and then drag them around until you get a route you like.  It takes just a few seconds to knock up a 50 mile route doing it this way.

If you’re really stuck for inspiration for new rides, sit back and let plotaroute.com do all the work for you!  Using its impressive Make Me a Route feature, you just say where you want to start and how long you want the ride to be and it will come up with 10 suggestions for you to consider.  You can tweak the settings by specifying roads you want to avoid and by selecting paved surfaces only if you want something you can ride with a road bike. You can also steer the suggested routes in a particular direction by adding an additional waypoint to be included. Check out this tutorial video to see a demo of this feature in action: ‘Make Me a Route’ – Tutorial Video.

If you’re planning a new route for a road bike, plotaroute.com has two premium map overlays that you might find useful: a Road Bikeable layer and a Street View Coverage layer.  The Road Bikeable option overlays grey lines on the route planner to indicate surfaces that are likely to be suitable for road/racing bikes.  This map layer has been custom built for plotaroute.com using surface and access data from the OpenStreetMap project. Coverage is still growing and some caution has to be exercised, as it is based on open source data, but it can be a very useful guide when combined with other tools like Google Street View (referred to above) and the Street View Coverage map layer, which overlays blue lines on the route planner to show where Google Street View is available.  The Google Street View car will only drive on public roads, so this can help to flag up private roads that you may want to avoid.  Google Street View is also generally only available on roads that the Street View car can drive on, meaning that there is a very good chance they are also suitable for road bikes.

If you cycle with a group, there may be times when you want a number of variations to the planned route, so that people can choose an option that is best for their ability – either a shortcut, an extension or perhaps a less hilly diversion.  This is where the Plot a Detour feature comes in very handy on plotaroute.com. This very simple but powerful feature lets you add detours to route maps as dashed lines, which can then be swapped for the original section of the route by simply clicking on them. Once you’ve selected any detours you want, just go ahead and download or print off the route, along with the relevant directions for the variation you’ve selected. 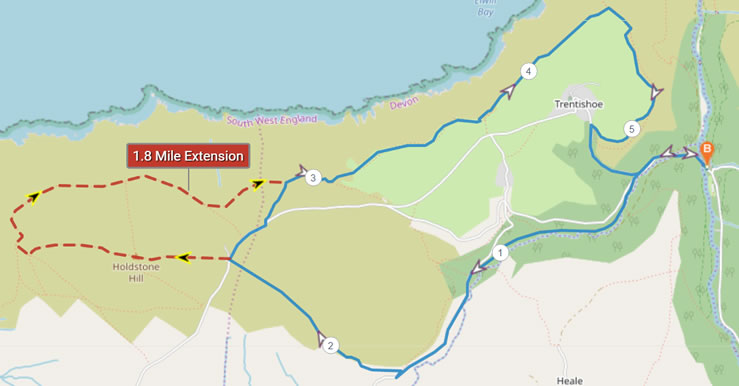 Premium members of plotaroute.com have access to additional auto-routing options that can help when planning routes suitable for different types of bike: road/racing bikes and off-road/mountain bikes.

The Road Bike option will avoid any known unpaved surfaces while also trying to avoid the most busy roads.

There are lots more useful route planning features on plotaroute.com that we haven't covered here, but hopefully this has been a useful roundup of some of the most interesting and useful one for cyclists.

Start a discussion about this

Read some of the most commonly asked questions about plotaroute.com.

We have a number of video tutorials demonstrating how to use key features on the site.

Join in our forums...

Take at look at our Forums for more help and advice.

Map
Plot a Route
Find a Route
My Routes
More